Since a new year has begun, it is interesting to take a look back at the wonderful year that has passed and remember all the remarkable canines who played important as well as heroic roles, proving themselves to be courageous, loving, strong and inspiring beings.
One of the latter is Kabang, a pooch abandoned in a rice patty and taken in by the Bunggal family in Zamboanga City, Philippines. Kabang changed her family's and her own destiny when in December 2011, she threw herself in front of a speeding motorbike that was about to run her human sister, Dina, and a little girl, Princess Diansing, over.

This four legged hero was hit by the vehicle and resulted seriously injured, losing her snout and upper jaw. People who witnessed the collision claim that the dog sensed the potential outcome and intentionally stepped in front of the motorcycle to protect the children. Despite being severely injured, Kabang survived, but eventually disappeared. Everybody feared that she had left in order to lie down and die alone. However, two weeks later and against all odds, the dog came back to her home to be reunited with her family. The local shelter wanted Kabang to be euthanized, but her family, the Bunggals, thankful for what she had done for her siblings, refused.


Her act of bravery allowed Kabang to gain a lot of well-deserved popularity and changed the fate not only of the children she saved, but also of their whole community. The story appeared in numerous media outlets and become one of the most beautiful and inspirational stories of Philippines in 2011. It quickly spread worldwide throughout all of 2012. When these news reached Karen Kenngott, a critical-care nurse from Buffalo, N.Y., an online fundraising campaign and the movement called Care For Kabang began. These efforts combined the help of the Animal Welfare Coalition of the Philippines (AWC), partnering veterinarians, and thousands of people around the world who contributed with donations. The sums collected
allowed Kabang to fly to the United States to receive medical treatment, since veterinarians in the Philippines did not have the means to treat her properly.

In September 2012, Care For Kabang's fundraising goal was attained and, in October of the same year, Dr. Boaz Arzi and Dr. Frank Verstraete, two specialist surgeons at the University of California Davis Veterinary Medical Teaching Hospital began treating the dog Kabang.
However, things had never been easy for Kabang. When she arrived at UC Davis, Kabang got several tests done, which resulted in her being diagnosed with cancer and heart-worms. Therefore, the reconstructive surgery needed to ensure a proper closing of her wounds had to be postponed until she had recovered from her two newly-discovered diseases. This incredible pooch, who became a mother of six in April 2012, endured a six-week treatment with intravenous chemotherapy infusions and seems to have survived and won her fight against cancer, as she continues to be treated for the heart-worms.

After finishing all these treatment, Kabang will be having surgery and she should be returning to Philippines in May or June to continue living a happy and healthy life.

Kabang miraculous story is a reminder that one should never lose faith. This is a story of survival against all odds, which fortunately lead to a well-deserved victory. This pooch's life could have easily come to an end two years ago. However, she has fought ever since overcoming all adversities and living to be not only a year older, but also a mother.

Because every New Year is a new beginning and along with it comes renewed hope, our wish is that in 2014 we will once again have a toast to Kabang's health.

Update: In June 2013, Kabang returned home to promote animal welfare and responsible ownership in the Philippines and beyond. Here is the last publication of the Care For Kabang Facebook page. 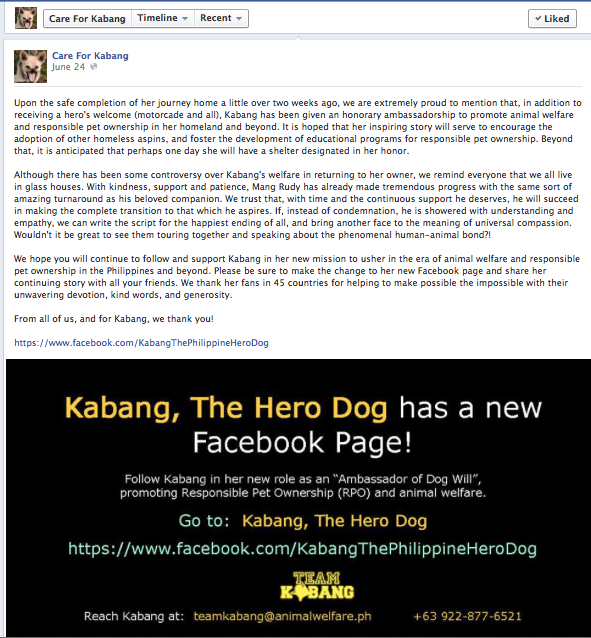 CosmoDoggyCheers for Kabang as well as all fighters and survivors!